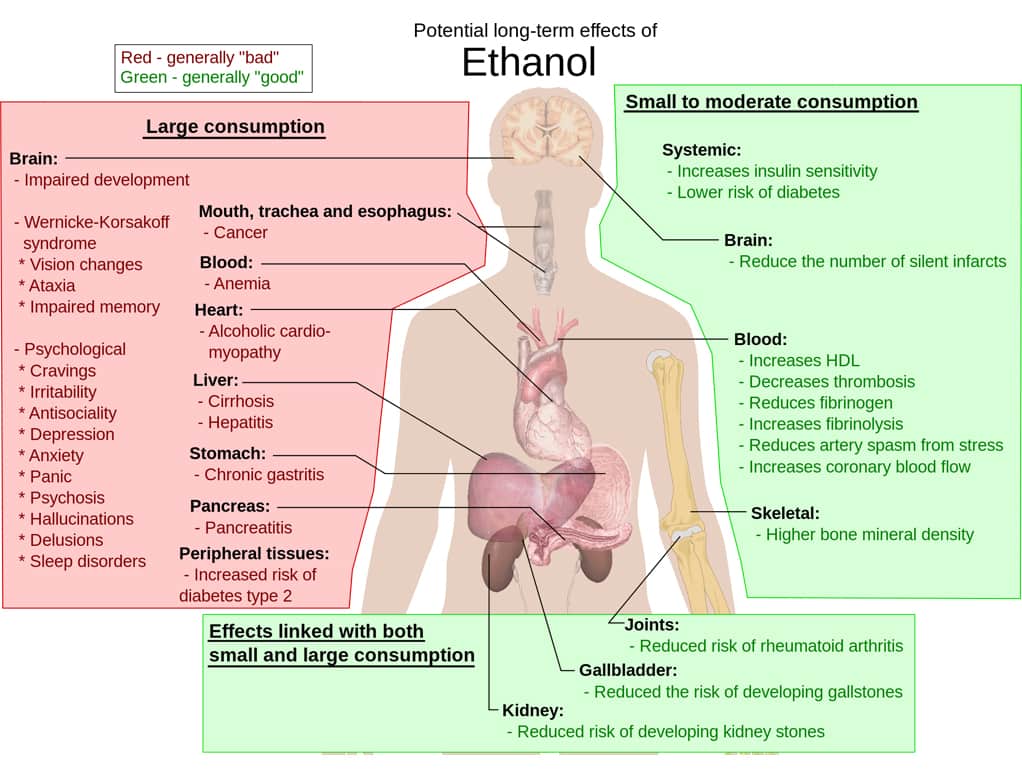 People drink to socialize, celebrate, and relax. Alcohol often has a strong effect on people – and throughout history, we’ve struggled to understand and manage alcohol’s power. Why does alcohol cause us to act and feel differently? How much is too much? Why do some people become addicted while others do not?

Here at NIAAA, we are constantly researching the answers to these and many other questions about alcohol. Here’s what we know:

Alcohol’s effects vary from person to person, depending on a variety of factors, including:

How much you drink
How often you drink
Your age
Your health status
Your family history
While drinking alcohol is itself not necessarily a problem – drinking too much can cause a range of consequences, and increase your risk for a variety of problems.

Consequences of drinking too much Alcohol enters your bloodstream as soon as you take your first sip. Alcohol’s immediate effects can appear within about 10 minutes. As you drink, you increase your blood alcohol concentration (BAC) level, which is the amount of alcohol present in your bloodstream. The higher your BAC, the more impaired you become by alcohol’s effects. These effects can include:

Car crashes and other accidents
Risky behavior
Violent behavior
Suicide and homicide
People who drink too much over a long period of time may experience alcohol’s longer-term effects, which can include:

Alcohol use disorder
Health problems
Increased risk for certain cancers
Alcohol’s Effects on the Body
Drinking too much – on a single occasion or over time – can take a serious toll on your health. Here’s how alcohol can affect your body:

Drinking a lot over a long time or too much on a single occasion can damage the heart, causing problems including:

Liver:
Heavy drinking takes a toll on the liver and can lead to a variety of problems and liver inflammations including:

Steatosis, or fatty liver
Alcoholic hepatitis
Fibrosis
Cirrhosis
Pancreas:
Alcohol causes the pancreas to produce toxic substances that can eventually lead to pancreatitis, a dangerous inflammation and swelling of the blood vessels in the pancreas that prevents proper digestion.

Cancer:
Drinking too much alcohol can increase your risk of developing certain cancers, including cancers of the:

Immune System:
Drinking too much can weaken your immune system, making your body a much easier target for disease. Chronic drinkers are more liable to contract diseases like pneumonia and tuberculosis than people who do not drink too much. Drinking a lot on a single occasion slows your body’s ability to ward off infections – even up to 24 hours after getting drunk.

Problem drinking that becomes severe is given the medical diagnosis of “alcohol use disorder” or AUD. Approximately 7.2 percent or 17 million adults in the United States ages 18 and older had an AUD in 2012. This includes 11.2 million men and 5.7 million women. Adolescents can be diagnosed with an AUD as well, and in 2012, an estimated 855,000 adolescents ages 12–17 had an AUD.

To be diagnosed with an AUD, individuals must meet certain criteria outlined in the Diagnostic and Statistical Manual of Mental Disorders (DSM). Under DSM–5, the current version of the DSM, anyone meeting any two of the 11 criteria during the same 12-month period receives a diagnosis of AUD. The severity of an AUD—mild, moderate, or severe—is based on the number of criteria met.
To assess whether you or loved one may have an AUD, here are some questions to ask. In the past year, have you:
Had times when you ended up drinking more, or longer than you intended?
More than once wanted to cut down or stop drinking, or tried to, but couldn’t?
Spent a lot of time drinking? Or being sick or getting over the aftereffects?
Experienced craving — a strong need, or urge, to drink?
Found that drinking — or being sick from drinking — often interfered with taking care of your home or family? Or caused job troubles? Or school problems?
Continued to drink even though it was causing trouble with your family or friends?
Given up or cut back on activities that were important or interesting to you, or gave you pleasure, in order to drink?
More than once gotten into situations while or after drinking that increased your chances of getting hurt (such as driving, swimming, using machinery, walking in a dangerous area, or having unsafe sex)?
Continued to drink even though it was making you feel depressed or anxious or adding to another health problem? Or after having had a memory blackout?
Had to drink much more than you once did to get the effect you want? Or found that your usual number of drinks had much less effect than before?
Found that when the effects of alcohol were wearing off, you had withdrawal symptoms, such as trouble sleeping, shakiness, irritability, anxiety, depression, restlessness, nausea, or sweating? Or sensed things that were not there?
If you have any of these symptoms, your drinking may already be a cause for concern. The more symptoms you have, the more urgent the need for change. A health professional can conduct a formal assessment of your symptoms to see if an alcohol use disorder is present.
WINE
However severe the problem may seem, most people with an alcohol use disorder can benefit from treatment. Unfortunately, only of a fraction of people who could benefit from treatment receive help. In 2012, for example, 1.4 million adults received treatment for an AUD at a specialized facility (8.4 percent of adults in need). This included 416,000 women (7.3 percent of women in need) and 1.0 million men (8.9 percent of men in need).
Ultimately, receiving treatment can improve an individual’s chances of success in overcoming an AUD.

Fetal alcohol exposure occurs when a woman drinks while pregnant. No amount of alcohol is safe for pregnant women to drink. Nevertheless, data from prenatal clinics and postnatal studies suggest that 20 to 30 percent of women do drink at some time during pregnancy.

Alcohol can disrupt fetal development at any stage during a pregnancy – including at the earliest stages and before a woman knows she is pregnant. Research shows that binge drinking, which means consuming four or more drinks per occasion, and regular heavy drinking put a fetus at the greatest risk for severe problems.2

People with FASD often have difficulty in the following areas:

Coordination
Emotional control
School work
Socialization
Holding a job
In addition, they often make bad decisions, repeat the same mistakes, trust the wrong people, and do not understand the consequences of their actions.

Risk Factors3
In addition to how much, how often, and in what stage of pregnancy a woman drinks, other factors can also play a role in how fetal alcohol exposure affects children. These factors include:

Poor health and inadequate nutrition
Living in a culture where binge or heavier drinking is common and accepted
Little awareness of FASD
Not receiving adequate prenatal care
Social isolation
Exposure to higher levels of stress
Interventions
Researchers and clinicians have developed some effective learning and behavioral interventions to help people living with FASD. They are also investigating new behavioral interventions, as well as dietary supplementation and physical therapy.

Support & Treatment
Treatment for alcohol use disorders (AUDs), once essentially limited to the mutual support group Alcoholics Anonymous founded in 1935, has seen many significant advances. In addition to mutual support groups, AUDs can be treated with medications and behavioral therapies, as well as combinations of treatments. Technology—such as email and the Internet—has opened new avenues for diagnosing and treating people with AUDs. And researchers continue to develop alternative treatment strategies that can offer help to everyone who wants to change their drinking habits.

For information on treatment and support in your area, please contact any of the following:
National Drug and Alcohol Treatment Referral Routing Service

When you call this toll-free number, a recorded message (English or Spanish language) gives you the following options:

Get the Alcohol brochure.