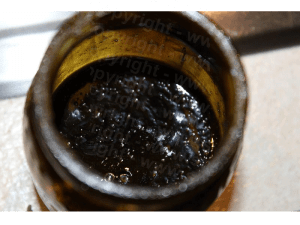 The term hash oil is used by illicit drug users and dealers but is a misnomer in suggesting any resemblance to hashish.

Hash oil is produced by extracting the cannabinoids from plant material with a solvent. The color and odor of the resulting extract will vary, depending on the type of solvent used. Current samples of the oil, a viscous liquid ranging from amber to dark brown in color, average about 15 percent THC although it is frequently as high as 50.9% according to the DEA.

The tetrahydrocannabinol (THC) content of the oil varies tremendously since the manufacturers use a random assortment of marijuana plants and preparation techniques. Dealers sometimes cut their oils with other oils.

In terms of its psychoactive effect, a drop or two of this liquid on a cigarette is equal to a single “joint” of marijuana.

Hash, or marijuana oil, can also be known as hashish oil, butane/butane hash/honey oil (BHO), cannabis oil, liquid cannabis, hemp bud oleoresin, wax, or simply a dab is an oleoresin obtained by extraction of marijuana and/or hashish. In an industry that is not carefully monitored or have strict standards changes happen quickly.

METHOD:
Participants (n=357) reported on their history of cannabis use, their experience with hash oil and the process of “dabbing,” reasons for choosing “dabs” over other methods, and any problems related to both flower cannabis and butane hash oil.

RESULTS:
Analyses revealed that using “dabs” created no more problems or accidents than using flower cannabis. Participants did report that “dabs” led to higher tolerance and withdrawal (as defined by the participants), suggesting that the practice might be more likely to lead to symptoms of addiction or dependence.

CONCLUSIONS:
The use of butane hash oil has spread outside of the medical marijuana community, and users view it as significantly more dangerous than other forms of cannabis use.