On Nov. 5 the Colombian Navy, assisting by the U.S. Drug Enforcement Agency and local law enforcement agencies, raided a boatyard near the Cucurrupí River in the Chocó area of Colombia. Under a makeshift roof they discovered a high-capacity narco submarine, the Colombian Navy announced.

The submarine is estimated to have cost $1.5 million to construct, according to officials. Based on the plans that were seized by Colombian authorities, had it sailed, it would have carried some six metric tons of cocaine towards the American market, valued at around $120 million.

Put into perspective, most narco submarines interdicted by the U.S. Navy and Coast Guard carry around 1.6 metric tons of cocaine, worth approximately $30 to 35 million. The trend had been towards smaller payloads per trip, but the discovery of the new submarine points toward a trend reversal.

Another significant difference compared to other narco-submarines is that this seized vessel is fully submersible, at least for short periods of time. Virtually all narco submarines interdicted at sea have been more correctly termed low-profile vessels (LPVs). Also known as semi-submersibles, these are craft designed to run exceptionally low in the water to avoid detection. But they cannot fully submerge. This submarine’s cylindrical hull, sealed roof hatch and hydroplanes all point to some degree of submerged running.

Underwater it uses batteries to power two electric motors. Ten tons of batteries give it an estimated endurance of 12 hours, which would equate to about 32 nautical miles if the submerged speed is around three knots. Clearly, even if the cruising speed is higher, an electric submersible like this cannot make the entire trip unaided. A towing ring on the nose points to the answer: the craft is designed to be towed by a larger vessel until close to its destination. It would then make the final leg on its own. Once unloaded, it would be scuttled and join the hundreds of discarded narco subs which litter the seafloor. 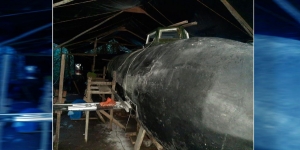 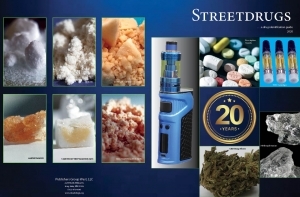